The U.S. M&A industry had a well-documented record year in 2021. Sellers were the benefactor of a significant amount of demand, low rates, an abundance of capital, and higher multiples. 2022 started off with a lot of momentum and has since cooled down. Unlike 2021, there are more headwinds facing buyers and sellers in the current economic climate, including rising interest rates, supply chain disruptions, higher energy prices, and surging inflation. These headwinds have clearly impacted the M&A market. That said, certain industry sectors have fared much better than others. Additionally, the market has clearly impacted the larger deals much more than the middle-market.

Below is a year-by-year view highlighting which industry sectors are driving M&A activity. In each year, 4 industries make up most of the deals: Consumer Discretionary, Health Care, Industrials, and Information Technology. In total, these 4 industries are responsible for approximately 64 percent of the middle-market M&A deals in the United States. The next largest sector, financials, accounts for approximately 9.4 percent of the deal activity.

Within these industries, there are some clear changes occurring as a result of the current industry dynamics. The most significant is the slowdown in Information Technology deals. This industry has had a 16 percent drop from its share of the 2021 deal market to the 2022 deal market. Conversely, Health Care deals rose 12.6 percent during 2022 and now comprises 17.8 percent of the deal market up from 15.8 percent in 2021. The other notable industry sector move was Energy. In line with the rapid rise in energy prices, M&A activity in that sector is heating up. This sector’s share of the M&A market grew 13.2 percent from 2021 to 2022. We anticipate this sector to continue to grow in significance given the focus on energy and alternative energy. 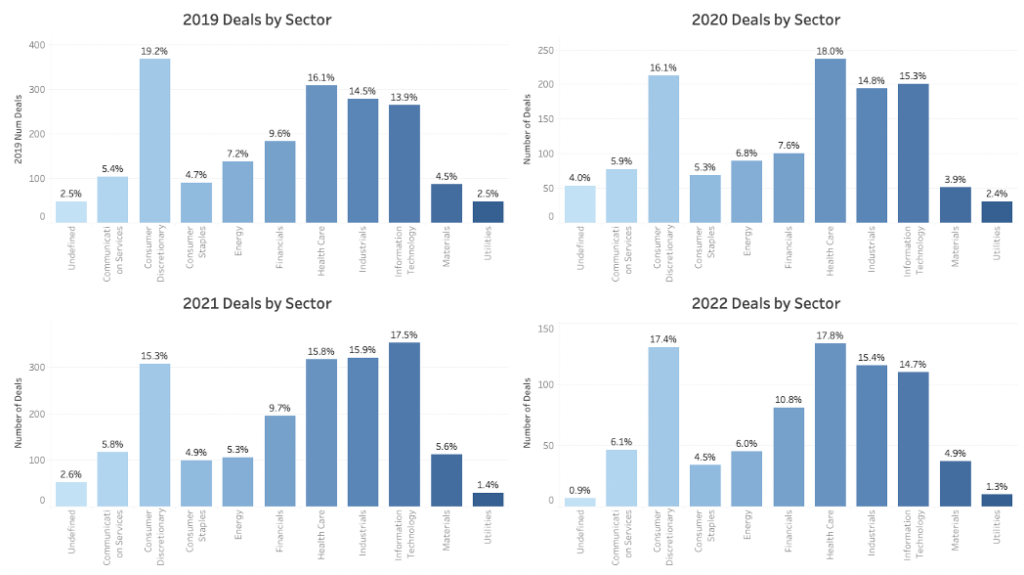 Based on deal volume through the first half of 2022 (annualized), the number of deals has declined by only 4.5 percent from 2021. However, if you look at the value of the M&A deals through the first half of 2022 (annualized), the value of these deals has dropped a whopping 38.3 percent. This stat alone highlights the significant decline in large deals. The charts below highlight how the deals below $250 million are continuing at a similar pace as 2021. Deal value for the sub $250 mm deal market is roughly the same and deal volume is trending higher than 2021. This segment of the M&A market is still quite hot and showing very little slow down from the record-setting year in 2021.

The larger deal market is an entirely different story. Deal volume of M&A activity in the $500 million and above deal size has dropped approximately 35.4 percent from 2021 to the first half of 2022 (annualized). The deal value of these sized deals has dropped 42.6 percent. These drops are significant and highlight how the larger deal market has already deteriorated due to market conditions.

It will be interesting to track the lower end of the market over the next 6 months. We expect that there will be some deterioration in the middle-market during the 2nd half of 2022, however, we do not expect the decline to come anywhere near what we are witnessing in the large part of the market. 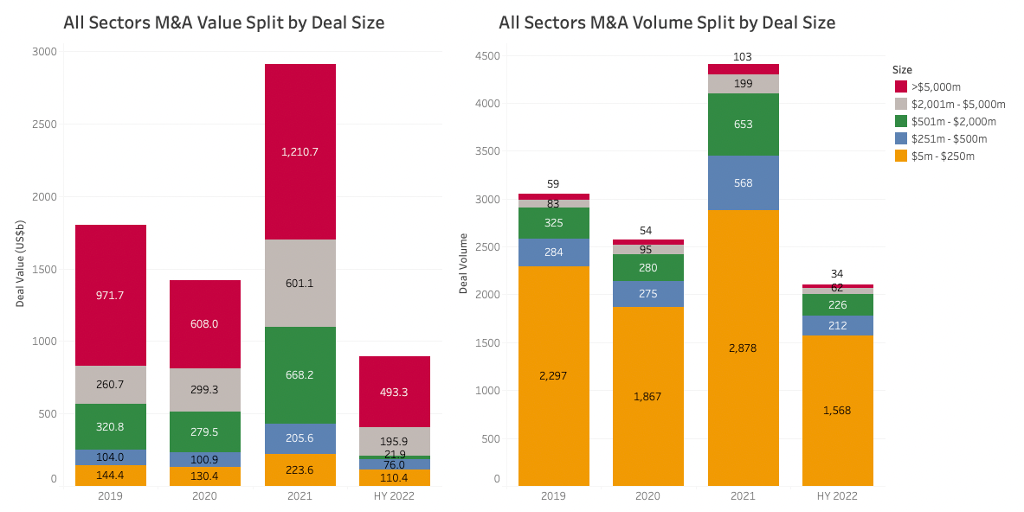 While the large deal portion of the market has slowed through the first half of 2022, we continue to see significant levels of dry powder as funds raised at private equity firms continue to be at very high levels. Even though the uninvested capital has come down slightly during the first half of 2022, it is still at a high level. A vast majority of this capital has been raised during the last 3 years. Given that, there is still a window to invest this money over the coming years. Private equity won’t be pressured into overpaying during a turbulent 2022 based on this timing.

If you break down the funds raised, an interesting component is the size of funds that have the dry powder. Funds in the $500 mm or under categories have seen a decline in the funds raised and these levels are much lower than they were in 2014-2016. What this suggests is that middle-market deals won’t be met with the same type of private equity funding as they would have over the last 5 years. Conversely, the larger funds have significantly increased their capital raised compared to where they were historically. Given the sharp drop in M&A deals in the larger part of the market through the first half of 2022 and the significant capital raised to do M&A in this part of the market, we would expect M&A activity to become more active in the latter half of 2022 and into 2023 in the larger deal market.

The M&A market is facing a number of significant undercurrents that will impact the activity and values in the deal market. During the first half of 2022, there was continued strength in the lower middle-market deals. These deals continue at their torrid pace set in 2021. The larger end of the market was quite different. There were significant declines in larger deals. This decline might be short-lived as there are record levels of private equity money raised targeting the larger end of the market. We expect the market to continue to ease up from its peak in 2021. We do not expect this easing up to persist beyond the end of this year or early 2023. 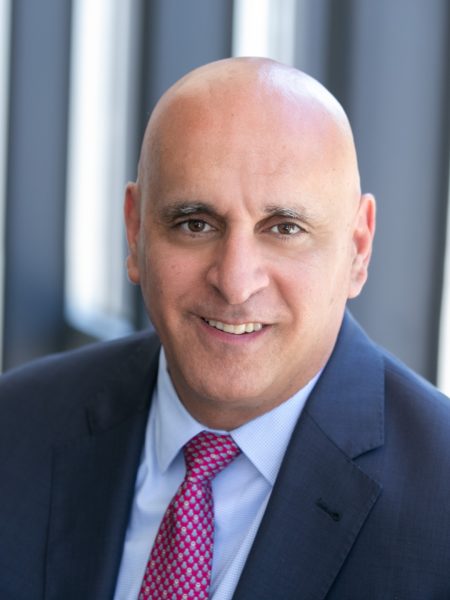 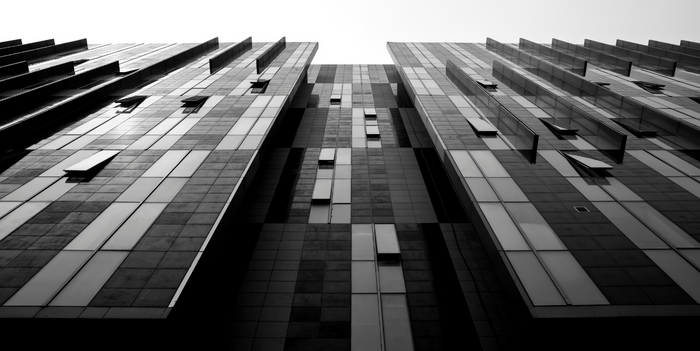 There are more headwinds facing buyers and sellers in the current economic climate than in 2021. Rising interest rates, supply chain disruptions, higher energy prices, and surging inflation have clearly impacted the M&A market and certain industry sectors have fared much better than others. 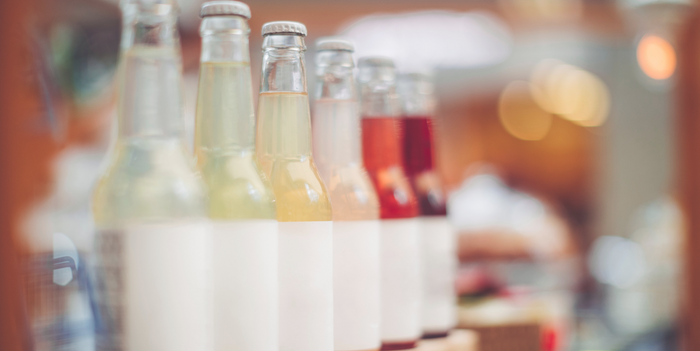 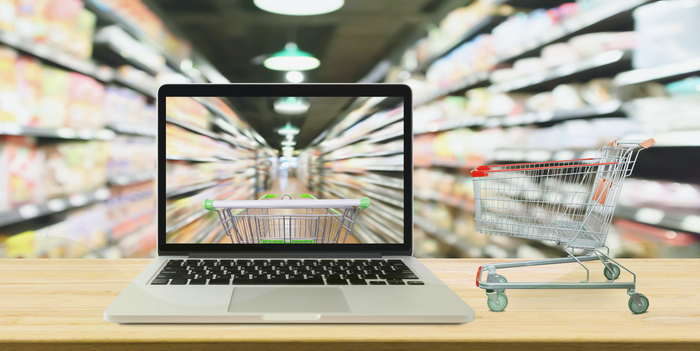